The Muslims Did It

Gratefully isolated in France following the bombings in London, I spent a great deal of time musing on what I would come home to. I don't mean more attacks or the altered atmosphere of the city but where the blame had been laid.

I wish I'd put a bet on it being a Muslims fault.

Grainy CCTV pictures of people with dark skin, fabricated stories on what goes on in Mosques, disgusting kiss and tell from people looking to make a quick buck on the back of death about how those involved seemed so normal, that they actually loved their families and that they, shock horror, even had an education.

Tenuous links are being drawn to the Arab world, al-Qaeda and anyone with dark skin and a belief in Islam. The vultures circle, the bad guy has been found, Evil has a physical form after a period of apparition and the long dead form of Osama Bin-Laden hovering over us and the verdict is delivered in media friendly bites of info-fact.

What rubbish. There would be no 'terrorism' if there was no media, the media perpetuates terror by its craving for it and the news opportunities it presents. The media is part of the event, part of the terror, part of creating the illusion.

Remember this, people will win awards for their coverage of the London bombings. This is the world we have built, this is the oxygen that fills the lungs of terror and the demonisation of Muslims will lead to a de-humanisation of Muslims and we know where that leads: Srebrenica. 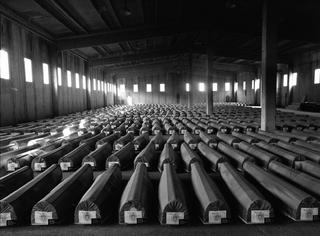 Written by Daniel Hoffmann-Gill at 12:05