Terror's War Against The War On Terror 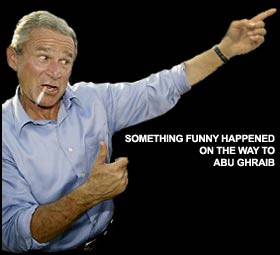 11/9 (please note correct formatting of the date) was an inevitable act of grotesque violence against a world power so far in advance of it's peers that one must question whether it was an act of terror at all, or rather a much needed stab in a wet paper bag against the uber-power that bestrides our globe like an irate toddler.

When some thing becomes as powerful and as all consuming as the US, some thing else must raise up and strike the ascendant power as hard as it can and in the most desperate form possible.

You can not have total power without some force moving to dent that power. It is the natural order of things, so whatever the total power is...let's say chicken, or perhaps Wal-Mart, whenever the subject matter in question reaches a certain level of domination it is then struck hard from another source and no, that source isn't always Muslims.

In chicken's case it was salmonella and the rise in popularity of turkeys (no, not Turkey, you guys are obsessed with Muslims being to blame); Wal-Mart's 11/9 is yet to come but it will come...

What is important to acknowledge is that whatever form the futile attempt to topple the total power takes, it must be on a grand and previously unheard of scale. It must be as vulgar and media friendly in its generation of simulacrum as the total power in question.

And thus the ultimate act of making neutered the total power provokes a response that enables the US to re-assert the size of it's power/phallus and the promise of the mother of all wars and we end up with one of the most wonderful bits of pumped-up nonsense: THE WAR ON TERROR!

This is a fake war. It does not exist. It exists only in the third-person of the media and the minds of people and that does not make it real. It is not being fought, it has no battleground and no form. It is a simulated response to an act that managed to out-aggrandise the US and so in response they belched out a fakery (all they were capable of with no tangible foe to strike) to mask the voluminous of the event that had enveloped them.

Events for a brief time became so real that the total power was struck for any actual means of reposte. And so eventually it creates a fake war that it can win, because the opponent only deals in actuality rather than posturing; it has no care for a war with the total power but rather epic strikes to reduce the mass of it's reach.

One can't help but feel that the US is not only fighting a fictional war but it is losing this war (which is in essence a battle with itself) such is the dilemma faced by the total power. For in truely showing the full force of its power it would destroy itself and all other Nations that by there very existence denotes that they have total power in the first place.

Written by Daniel Hoffmann-Gill at 21:40