We Got Ourselves a New Nigger 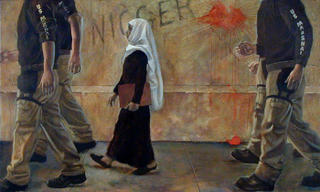 Young black men in the UK can relax (for a few weeks at least) as the British police have at last found a replacement ethnic group to harass with stop and search techniques.

So be warned if you look slightly like an Arab, or are from India, Pakistan, Bangladesh etc and are carrying bags; be prepared to be stopped and asked questions about what the hell you think you're doing walking the streets of the UK.

Swear to God if I see coppers stopping yet another man who looks like a Muslim I may attack the Houses of Parliament myself just to prove white folk can be terrorists too. More stuff to cheer you up...

REJOICE! Commuters in London will sleep easier knowing that 28 dogs will be now sniffing bags at Tube stations across the city. What tosh, this is yet another example of a pure, empty gesture being construed by the media as a step towards defeating terror.

The dogs will do nothing except look good for photo opportunities as their poxy number can in no way, shape or form cover the London underground.

Tomorrow brings some acting, devising a new play that I hope to be touring from September onwards but more on that at a later date. I've got a new phone to play with.
Written by Daniel Hoffmann-Gill at 20:46