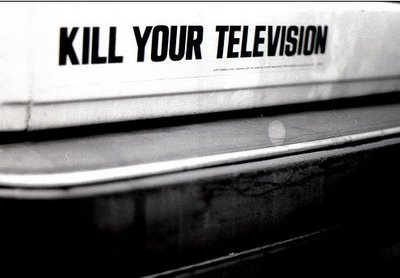 I don’t know whether it was the enormous grotesquery of the images or the deluge of simulacra-emotion but that winter I moved into a new place and I decided that I was going to try and live without a TV.

Five years of a TV free existence has been a good one, plenty of reading, plenty of sitting listening to good music and of course, plenty of time on the damn internet. It amazes me that people still got thrown by it, as if I’m making a comment on the fact they still the watch the idiot box in the corner of their living room (or perhaps taking up an entire wall like a flat screen shrine). It usually sparks a discussion about how little they watch TV, like they’re trying to compete but I know that if you still have one, you still have a reliance on it. The conversation then goes to “How can you be an actor if you don’t watch TV?” which personally, I love the logic of.

As if TV is some guide to good acting, as if it is the be all and end all of what it means to be a professional performer. I can honestly say that not watching TV has probably made me a better actor!

I’ve become a bit of an ex-smoker in that I’m quite disparaging about my old habit, I see TV as a narcotic, something that stops people communicating and limiting the field of discussion (when people talk with me, they can’t use TV as a small talk, which makes for better conversations), I think it can kill human relationships and the quality of much of it is little more than exploitative rubbish.

If any readers out there are thinking of getting rid of the TV and trying a life without it, you have my full backing, kick the habit, GO FOR IT!
Written by Daniel Hoffmann-Gill at 20:54