I Don't Believe You 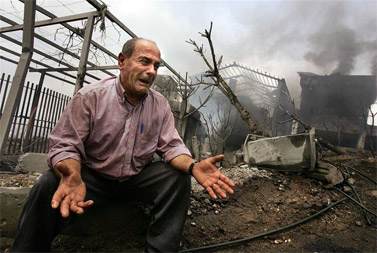 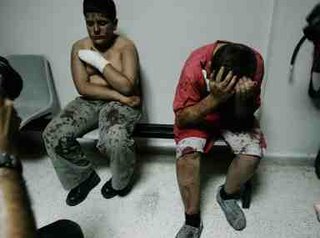 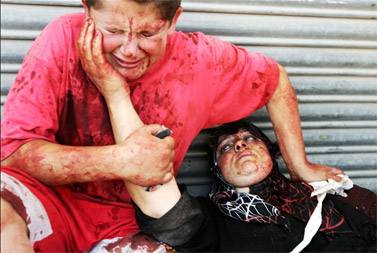 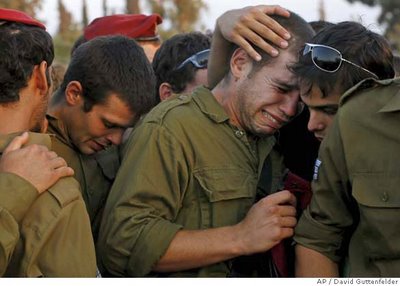 Israel is asking the US for a 'speed' delivery (there's a lot of Lebanese children left to be killed) of short-range antipersonnel rockets armed with cluster munitions. These M-26 artillery rockets, which are fired in barrages and carry hundreds of grenade-like bomblets that scatter and explode over a broad area, are likely to be approved shortly, along with other arms, a senior US official said.

Brilliant, ceasefire on one hand but feeding Israel with more weapons to kill even more innocent people on the other. Fuck these hypocrites, these murderers, these cowards.

Both sides are now seriously impinging the ability of aid to get through to where it is most needed, causing unnecessary death and as the dead bodies pile up to act as a futile reminder to the rest of the world, we stand and watch and do nothing.

And as I've kept banging on about, in spite of all the doubters thinking that this was actually about the abducted IDF soldiers, Israel had been planning a war against Lebanon for at least a year and was doing so with the complicite of the Bush regime, building up large scale forces on the border. So you're telling me these troops did not leak into Lebanon in order to provoke action from Hezbollah? Of course they wouldn't do something like that...

And then we have the EXPLOSIVE LIQUIDS TERROR PLOT! (OR THE NEXT 9/11 AND OTHER SUCH HYPERBOLE)

You'll not be surprised to know that I think this is pile of scaremongering nonsense, rooted in an effort to keep us frightened and thus under the thumb, never mind distracted from how badly things are going in Iraq, Palestine and of course Lebanon. A scared population is an easier one to control and this fake terror has happened before: tanks at Heathrow, the Ricin plot, the Stockwell plot and the Forest Gate plot.

Bush spewed out the usual rubbish about how this is "a stark reminder that this nation is at war with Islamic fascists who will use any means to destroy those of us who love freedom, to hurt our nation," and it looks like the UK government rolled out its stupid, US-style, terror-o-meter just in time folks. Phew, thank baby Jesus for that...

I don't believe you. You don't scare me. Fuck you.
Written by Daniel Hoffmann-Gill at 19:21

New comments are not allowed.