The Killing Will Go On Until We Find A Plan 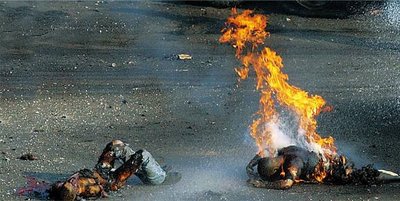 "The Jewish bandits are despicable cowards who hide behind women and children."

SS-Gruppenführer Jürgen Stroop on the resistance in the Warsaw Ghetto, 1943.

This is how it works.

Israel eventually bows to world (excluding the US/UK axis) pressure and agrees to the ceasefire that never actually was, which lasted all of 24 hours and now things are back in full swing. But get this...

Israel are now going to step up their activities, they are going to increase the aerial bombardments and also begin a larger scale ground war.
Jesus Christ.

Senior Israeli officials said the government wants to pursue its military offensive until an international force arrives (in other words, get as much killing done as possible before the UN turns up) and Israeli officials also acknowledged that the United States was under mounting pressure and that it was unclear whether it would let the offensive continue until peacekeepers arrive.

That speaks volumes, the United States is complicite in this atrocity and if it was willing to totally condemn the actions of Israel and make demands for a ceasefire I have no doubt Israel would comply. As it is we have 750 dead Lebanese people with the serious threat of even more murders and the war crimes of the Zionists exploding beyond all reason.

And now for some food for thought...

Anyone remember Gilad Shalit, that Israeli soldier abducted by Hamas on the 25th June? Well, funnily enough the day before the IDF had abducted two Palestinian civilians but did we hear about that? Or are we hearing about Gilad Shalit? It's rhetorical, so I'll move on to say that it seems Israel really is the mini-me of the United States; in that it can carry out any unlawful act it wants but when someone else returns the favour it cries foul and uses it to justify its terrible punishment.
Written by Daniel Hoffmann-Gill at 00:01