The Lesson is Over, You Can Go Home Now 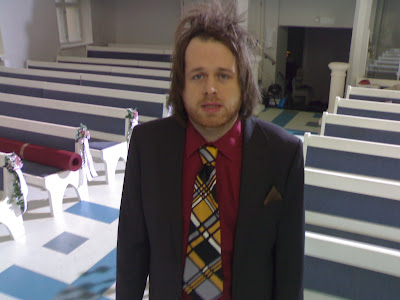 The run of 'The Lesson' ended on Sunday the 25th and went really well (aside from an out of body acting experience on the second night), Ana and I both warmed up into the play as the shows went on and luckily audience numbers increased along with our abilities, it was nice to be acting again in front of live spectators in a role that I would never normally have a chance at and grateful to the director Arnaud Mugglestone for the opportunity.

Since the show closed I've been in house moving mode, unfortunately the deal is taking longer to go through than I thought so I'm splitting my time between my parent's gaff in Kent and the lovely Eva-Jane's house; which means that soon I'll be leaving Debden and the joys of Essex but more on that in another post I suppose.

The lack of time means that blogging will remain very light but one day I shall look back on the gaping holes in my blog and remember fondly the scramble for time to do all the jobs God sends to me.

And looking on the bright side, I'm not dying of cancer.

And I've had my massive wig cut back.

The First Night of The Lesson I was grateful that the theatre was not packed to the rafters, my nerves were terrible and my constant attempts to make sure that the order of the abstract and calamitous events of the last quarter of the play were fully ingrained in my memory only seemed to make them even more haphazard.

My marvellous costume, imagine a bearded Woody Allen with a comb over, helped me into the awkward and distorted physique of the Professor and the play started well enough, the audience quickly eased into the laughs and my co-actor Ana and I made excellent progress.

However, somewhere around page 203 I started to get the feeling that I had forgotten a massive chunk of script (I hadn’t) and became obsessed that I was destroying the show. I had a few moments of opening my mouth with little or no idea about what was to come out and somehow the correct lines popped out with as much gusto as I could muster.

Still, we got through it unscathed and go into tonight’s show with improved confidence and a strong desire to build on the success of yesterday.

Update From The Eye of the Storm

The juggling of house buying, moving to a new day job, directing a showcase and the demanding rehearsals of 'The Lesson' is proving to be a fun challenge indeed; with seemingly millions of lines to learn that have no connection to reality and a character ready to disintegrate at the shortest moments notice.

In spite of all this, it's so crucial not to lose sight of the most important thing, my partner and my lover Eva-Jane. All this would have little worth if it wasn't for her. Thus, Valentine's Day proved to be a welcome release as Eva-Jane and I dined at The Avenue after sharing a beautiful day together with much gift sharing and joy. Can I take a moment to introduce you all to Oobee (he's the pink chap on the bottom right)... 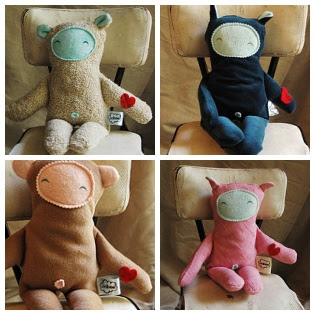 Thank you Eva-Jane, I love you with all my giant heart.

"Me and Oobee miss you while you're living on the edge."

Written by Daniel Hoffmann-Gill at 22:35 6 comments: 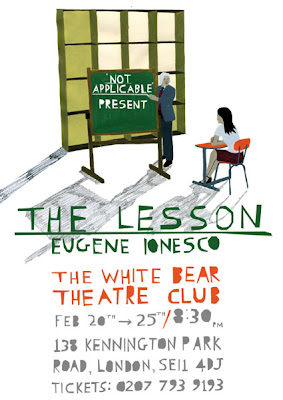 I know I said I was taking a break from blogging but I got mentioned in the Sunday Times as an example of a good blogger, someone who "details the sometimes tragically funny world of a struggling actor". Struggling?

And I’d just like to use my bit of the Internet to plug my new show, in case any of my UK based readers would like to come and see me act. If you’re the maniac in Canada obsessively attacking my girlfriend and me then please feel free to die in a plane crash on your journey over to see me…

The show is called ‘The Lesson’ and it is on at the White Bear Theatre in Kennington (a short trot from Kennington tube station on the Northern Line), 20th-24th February at 8.30pm and 25th February at 5.30pm; very reasonably priced tickets can be purchased from the box office on 020 793 9193.

I’ll leave you with the blurb for the show and I hope to see some of you there, I better go and learn my lines…

The Lesson, by one of the founding fathers of the theatre of the absurd, is alive and kicking with tragedy and humour, bleakness and farce. It is a chilling, but anarchically funny drama of verbal domination. An ‘antiplay’ where dream, nonsense and fantasy combine to create an unsettling view of society. The pupil has eagerly arrived for her lesson; the Professor is ready for her; what lesson shall ensue though?...

The Lesson is a play which deals with the issues of power and sexual politics. It challenges the notions of authority, political domination and dogma. As the drama unfolds we are provoked to question the assumption that received knowledge is the same as reasoned understanding.

A bright young pupil, full of confidence and aspiration, eagerly awaits her lesson. The, seemingly anxious, Professor arrives to give it to her. At first he is pleased with her progress and with the knowledge she has acquired so far, but as the lesson continues, and the holes in her learning and her capabilities are exposed, the more and more frustrated the Professor becomes with his young Pupil; and the more nonsensical his lecture becomes. As the Pupil’s confusion increases so too does the pain she is suffering and the Professor’s aggression. Until he goes too far; despite his concerned maid’s constant warnings not to.
Written by Daniel Hoffmann-Gill at 11:59 7 comments: 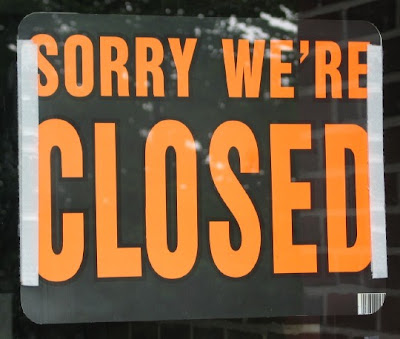 Got far too much on at the moment so blogging has to take a backseat.

Love, peace and respect to all those that matter.

See you on the other side.
Written by Daniel Hoffmann-Gill at 12:12 8 comments: 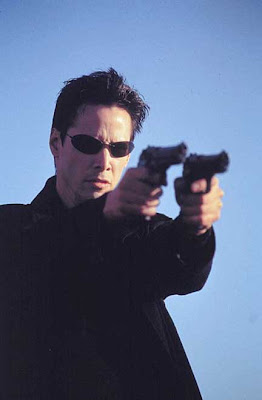 I was on the tube and some teenage lads were messing about, fair enough, its what being young is all about and I took my seat in another carriage so as not to be disturbed by the hepped-up youths.

But disturbed I was as their boiled sweet throwing shenanigans spilt into my section of the train and my shoe was hit by a misfired bit of candy. I had a quick decision to make: ignore the fact that the annoying kids were messing around with the peace and quiet of my journey and risk getting hit by more stray sweets or put an end to this nonsense immediately with a good bit of shouting and swearing. I choose the second option.

So swear and shout I did and the youths quickly disappeared back into the next carriage and bizarrely also stopped messing about in that one too; a lovely, small victory in the war on ignorance. Or was it?

The lads piled off at South Woodford and as they walked past the open door of my carriage, one of them prepared to lob a sweet in my direction. I looked up at the ugly mutt and watched as he threw the treat at me, it looped through the air, heading for my chest and in a flash I caught it. Without thinking I ran to the open door and took aim before unleashing the inch long locket straight into the face of the offending young man who let out a painful yelp.

This feat of Matrix style skill was too much for his pals who proceeded to leg it, along with their blinded mate. They hovered at the end of the platform when they realised I wasn’t going to follow them (I had places to be) and with the tube doors safely shut and the train moving they chased after my carriage to shout abuse and give me the finger to which I slowly and simply drew my finger across my neck and pointed to the brat holding his sweet damaged eye. 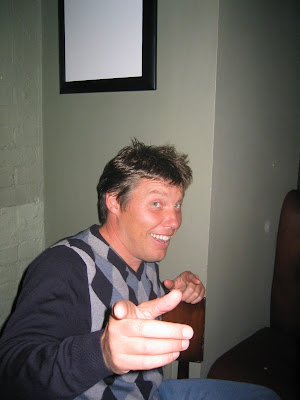 I’m just surfing and I found this site.

Well, I don’t know what to write, lovely weather today.

You wouldn’t say that if there was a cold snap.

Yes, a cold snap or a depression.

It’s my handle, like on the CB but today.

One nine a copy come on.

Like on CB, you know citizen band radio? This internet thing is like CB, but bigger and instead of talking you have to type.

I’ve had me dustbin nicked.

Yes, I’ve had it nicked last night. I usually bring it in straight away, but I was busy, my friend was round and he started telling me something personal, I can’t tell you what it is but you wouldn’t believe it.

And it was nicked?

Had it been emptied?

I’ll have to put a form in the post.

Okay. Is that everything?

Aren’t you going to ask for me address?

I’m looking for mixed race, have you any mixed race?

Sometimes, I mean I would is she was game, but I’d have to wear something.

No, twat. A Johnnie.

A knodder, a sheath, a condom, got to go he’s back.

You Guys Sure Must Have Prayed Hard... 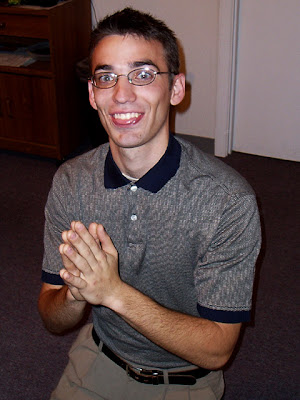 Because I got the job.

GET IN!
HOT DAMN, SUMMER IN THE CITY, BACK OF MY NECK GETTING DIRT AND GRITTY!
Thank you, one and all for all your prayers.
Have a mighty fine weekend.
Written by Daniel Hoffmann-Gill at 18:58 20 comments:

John van der Put is a lovely man and a very gifted blogger and I feel honoured to be his friend, I read his latest post and felt profoundly moved by it and feel it should be shared with a wider audience. So here it is, love to you John.

Things I wanted to say but didn't fit into the poem which doesn't really say what I wanted it to: I did the whole show to an empty door waiting for you to come in. I have no hope but grace, it's all I hold on to, it's all I can face. I ate dinner and couldn't taste it. I miss you like nothing else.
Written by Daniel Hoffmann-Gill at 23:12 1 comment: