A Love Supreme: the Bush Blair Axis of Evil (a Photo Essay) 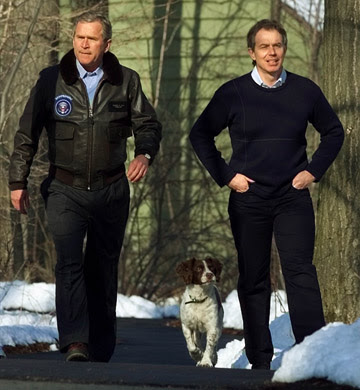 Bush in a bomber jacket, looking every inch the draft dodger and Blair in jeans that are so tight for him that he can barely fit his hands into the pockets. Classic look and of little surprise that the dog between them has more gravitas. 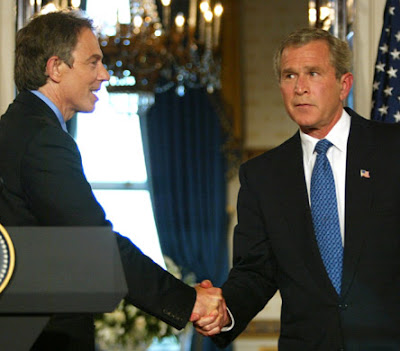 Always the joker, the leader of the free world can’t help but upstage his closest ally by pulling a stupid face when he shakes his hand. Notice the Prime minister’s white knuckles; this is a great sign of affection in the UK… 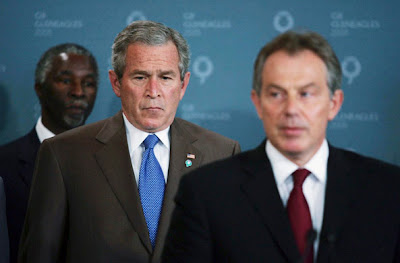 Bush and Blair were never comfortable around black guys and always felt more at ease around their Honky brethren, Blair is doing a good job of hiding the thought that Kofi Annan is going to mug him but Bush is terrified of the Negro behind him. 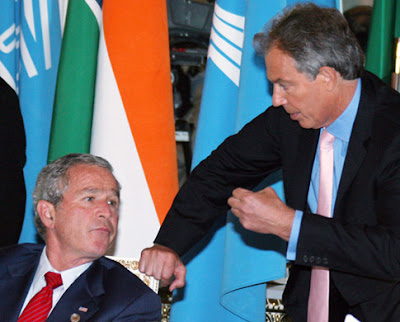 This was one wise crack too far from the self-appointed king of comedy and Blair is about to land one right on the nose of the US President (please note the fist technique the Prime minister is using, guaranteed to break the idiot-savants face) and it was only the quick thinking of Bush lackey Karl Rove, who took the punch on Bush’s behalf, that saved a major world crisis.

Written by Daniel Hoffmann-Gill at 11:10