The Story of the Number 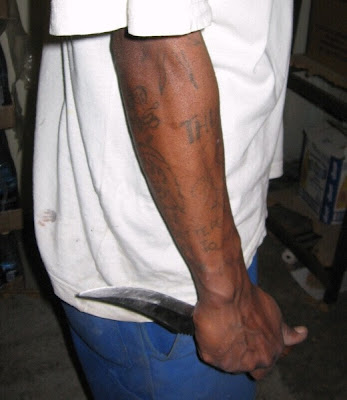 It began with Po, a man who is the embodiment of the fight for rights of all black people, who sees the exploitation of the black man in the mines of South Africa and realises that these young men need deliverance.

Then comes Nongoloza, he who drinks the blood from the bull's horn, a young Zulu, looking for work in the mines who is convinced by Po that the mines will kill him, and who is persuaded to join him in his crusade against white oppression.

Then comes Kilikijan, he who refuses to drink the blood from the bull's horn, a young Pondo, who is recruited, along with fifteen other men to whom Po teaches a secret language and the art of highway robbery.

Kilikijan and his seven men rob by day and Nongoloza and his six men rob by night. Their laws are recorded in stone, Po makes clear their laws must be followed to the letter and with that, a cattle hide is pressed onto the rock to record the law of the gang. Nongoloza and his six men carry the hide, Kilikijan and his seven men must carry the rock but the rock is cumbersome and difficult for the bandits to carry and it is dropped, smashing into two so that Kilikijan and his men only have half of the bandit's laws.
The schism comes when, before embarking on a joint expedition, Nongoloza says that he is sick and chooses to stay behind. He asks one of Kilikijan's men, a youngster by the name of Magubane, to stay behind with him. Upon returning, Kilikijan finds Nongoloza making love to Magubane and, enraged, challenges Nongoloza to a fight. Nongoloza nonchalantly replies that, according to the hide, sex between bandits is permissible as to avoid contact with women. Kilikijan retaliates by saying that he cannot trust that this law wasn't added to the hide after the fact, since half of his rock was missing. The two men commence fighting until they are both drenched in blood, and Po arrives to intervene.
Po, after listening to the accounts of both men, tells Kilikijan to travel to the mines to see whether the men there engage in sex with one another, but fails to explain any further. It is said that Kilikijan found that sex between men in the mines did happen, but opinions are divided as to what this means and whether it justifies Nongoloza's act. This was to become a pivotal disagreement between the two gangs that persists to this day. Po also says that under a rock at the entrance of his cave there is an old assegai and, if the two men find the tip of the assegai rusted, it will mean that Po has died. This prediction comes true and the two bands decide to separate: Nongoloza's band with its now eight men (including Magubane, who he decided to take with him), and Kilikijan's with its seven.
This is the beginning of the Number.
Nongoloza is the 28.
Kilikijan is the 27.
It is agreed that the day would still be divided between them as it had always been, and Kilikijan said: "You will recognize me by two rays of dawn sunlight: one over my right shoulder, the other in front of me"
The two gangs roam the countryside until they both meet up again inside Point Prison in Durban. Here, they encounter a group of six men led by a man named Grey, who are all frans (non-gangsters) who sit in a circle and flip a single silver coin between them. Nongoloza, upon demanding these men's possessions and being refused, is told by Kilikijan that these men were skilled smugglers and gamblers who had helped him in his early days in the prison.

Nongoloza decides to name the coin a spyker (nail), but Kilikijan insists that it is called a kroon (crown). Here, the story splits for 27s say that a fight over the gamblers broke out between the men, with Kilikijan defending the gamblers against the 28s' sexual appetites. The 28s say that Nongoloza decreed that the new group shall be called the 26s (both because there were six men and to indicate their inferior status), that they shall be the last gang to form in the prison, and that Kilikijan shall be answerable for their actions.
Some say that Grey is actually Magubane.
Grey is the 26.
The three camps were thus formed: the 26s responsible for gambling, smuggling and accruing wealth in general, the 28s for fighting on behalf of all three groups, and the 27s as the guardians of gang law and the peacekeepers between the gangsters.
It was decided that when a gangster broke a rule, the blood of a warder or frans must be spilled to set things right.

This is the Number.
Written by Daniel Hoffmann-Gill at 18:32