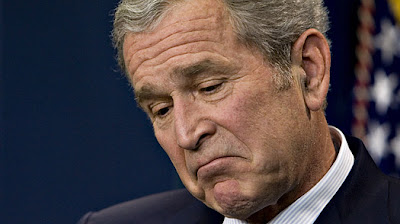 Bush's last press conference (aside from some final address type shit, no doubt from his bunker...) made me wonder.

It made me wonder if the US troops look up from their food, to their TV screens in the mess hall and realise they were sent to Iraq by a sissy rich kid who doesn't know what he's talking about? I wonder if they know they were sold out by an underachiever frat boy who never had to put himself on the line for anything? I wonder what they think when they see fat fucks in America at a hog dog eating contest stuffing their faces? I wonder what they think as they get wheeled into the hospital top find out if the doctors are going to be able to save that leg while Paris Hilton could sell her piss for a thousand dollars a teaspoon?

It also got me wondering, via reading the Constitution, about the ooze of Christianity into the American political spectrum, brought on by Bush and his cohorts and the subsequent retardation of America via the sheer anti-human nature of evangelical Christianity. These petty mini-tyrants, amateurs and cowards that make up the Christian Right should get out of America (there work is done...) and try to set up a church in Iraq and convert Shia and Sunni Muslims to Christianity.

But that would mean actually putting their life at risk for their faith, just as the Christians in Iraq do.

I think America missed a trick with the Intelligent Design debate, they should offer it in all schools and see natural selection at work right there. All the stupid kids will choose ID and all the ones with brains will go for Darwin. This will leave the stupid children to fill all those jobs vacated by illegal immigrants after some terrible Brownshirt legislation has been passed, they'll eat shitty fast food, smoke and drink. They'll be too illiterate and ignorant to make good choices and will destroy themselves. God will not save them.

Or, we could let all the red states offspring only have a diet of ID, Irreducible Complexity, School Prayer and Abstinence-only sex education. This would generate a gene pool so fucked-up we'd have enough cannon-fodder to fight a thousand war on terrors.