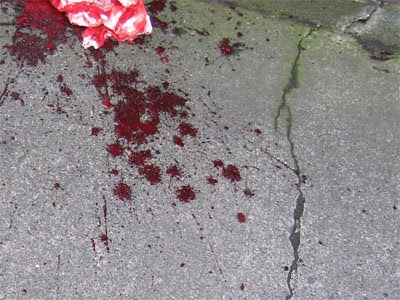 After the gig in Great Torrington in Devon, Mark and I stayed in a lovely little Bed & Breakfast.

I say lovely, the room was tiny and I couldn't use the toilet because I was too big for the bathroom and my knees bashed into the sink; so I had to sit all askew and crush my ball bags as I squatted over the latrine...but apart from that, it was sweet as.

We've stayed at this place before and the real treat is the breakfast, which is top notch and the lovely owners Rudy and Lona.

Lona likes to make chat and she told us about what she was up to the night before (not dogging, don't worry) and this club she is a member of: The Last Orders Club. Basically, a whole bunch of people put money in a pot and in return, they get a name of a famous person who is close to death. Whoever has the name of the one that dies first, gets what's in the pot. Rules are complex but cover stuff like, you can't wager on the demise of someone with a terminal illness already, or you can't have someone shot in order to bring in the wager and if anyone in The Last Orders Club passes away, all the money in the pot goes to charity.

As she told us she seemed quite embarrassed but I thought it was a great idea, it de-mystifies death and brings people together over the unlikely subject matter of the Grim Reaper. It reminds me that before the terror of Christianity came to our shores, the dead were celebrated and kept close to the family home rather than sanctified and placed in special places; thus making death something to be feared.

I'm thinking of starting up my own online Last Orders Club via a blog, any takers?
Written by Daniel Hoffmann-Gill at 09:31