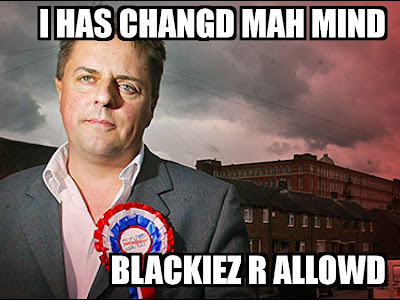 One thing I have noticed in my dealing with racists is that they do cling onto some terrible ideas and fight for them with a blind and desperate gusto which says much about the idea in the first place but, you have to admire such blind adherence to utterly unworkable ideas.

Because that is what the majority of their ideas are, unworkable nonsense.

It seems that top-Nazi Nick Griffin has retreated on one of their most unworkable ideas, the "send 'em back where they came from" nonsense because, he concedes, that no one wants it, likes it and it is totally impossible in enforce. So the fascist dream of an all-white Britain has fallen by the wayside.

It's a start, now all we need to is get them to see that the rest of their policies are impractical tosh and we'll be making real progress...
Written by Daniel Hoffmann-Gill at 13:31