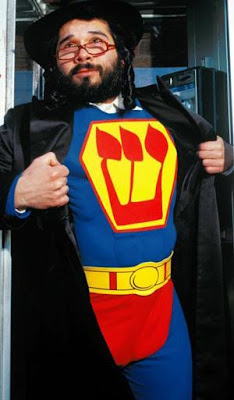 You have to laugh, otherwise you'd cry.

A bunch of Rabbis chartered a plane on Monday and took to the air above Israel.

To ward off Swine Flu of course, by shouting prayers down those weird phones you have on airplanes and by blowing ceremonial horns (which is not a euphemism for their willys) as loud as they could. Needless to say, the chief Rabbi in charge of the airborne war on Pig AIDS thought this was a very wise move and would "stop the pandemic so people will stop dying from it".

After they'd finished rocking backwards and forwards and blowing into trumpets, the group of Rabbis proudly announced that: "we are certain that, thanks to the prayer, the danger is already behind us" although whether the danger has passed for Israel based Gentiles and God forbid, the Palestinians I've no idea. I presume that the tooting of horns and prayers bounce off the non-Jews and perhaps, if you are Palestinian, exacerbate your chances of getting Swine Flu?

File this one under yet another reason as to why religion, in all it's silly forms, holds back humanity and is a waste of bloody time.

Oh and on an interesting side note, Swine Flu or to give it it's unofficial title Pig AIDS, is labelled somewhat differently in Israel, due to the deep loathing of all things pork. It is instead called Mexican Flu (or Tex-Mex AIDS as I've snazzily called it), which is not at all offensive to Mexican people all around the world, after all, this is all their fault in the first place isn't it?
Written by Daniel Hoffmann-Gill at 13:55