Let's Wrestle at the Buffalo Bar 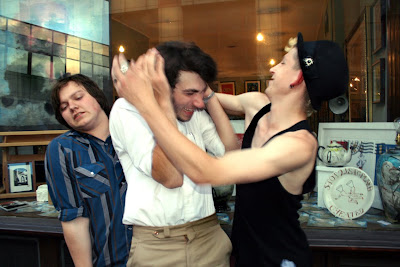 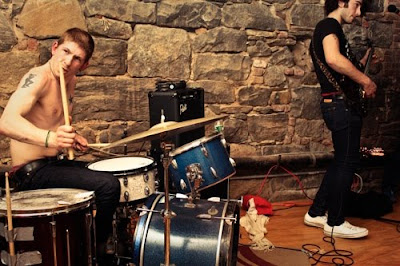 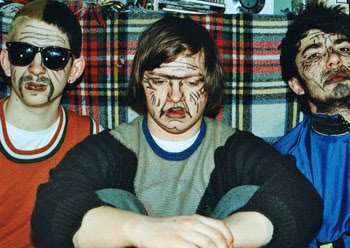 Last night Eva-Jane and I journeyed to the top of Upper Street in Islington and went to the Buffalo Bar to check out one of our many new favourite bands, the legendary bloody shambles that is Let's Wrestle.

To be clear, it was a fucking cracking gig, even if they did come on too late (on a school night) and not play for long enough.

They make for an odd looking bunch: Wesley Patrick Gonzalez on lead vox and Wedding Present style guitar is a cherub of a lad who came onto stage in a beige cardigan (matched with a beige shirt), that he took off before starting the gig. Clearly, the cardigan had to come off for him to unleash the full rock beast, think of it as a protective sheath because with the cardy off he beats the guitar like an errant child and sang so loud that I nearly passed out on numerous occasions during the gig (my ears still hurt). Rock and ruddy bloody roll.

Mike Lightning, on bass and alleged backing vocals, is the most conventionally handsome of the trio if a tad annoying in a posh school boy kind of way and he got hand ache from playing the bass so quickly and forgot the bass part to one of the songs. I'm sure though he is a lovely chap and his part in this fine racket is to provide some vigorous and loopy bass lines that move things along nicely.

Finally my favourite, if I had to pick, is the man on the traps: Darkus Bishop. Maybe it was the Minor Threat T-Shirt he was wearing or the fact that he looks like he should be in another band all together but his shellacking of the drum kit with seemingly the same beat for every song was as much a feat of physical endurance as it was a thing of simple beauty. I also loved the way his kit was set up, none of this modern hi-hat nonsense just a large ride cymbal to keep time, just like the good old days and a snare to beat the shit out of. Wonderful stuff!

They powered through a selection of songs from their debut album and sublime EP, sweating profusely, singing off-kilter, two sheets to the wind, it was an immortal performance of rock and roll music and I can't wait to see them again.

Written by Daniel Hoffmann-Gill at 15:36