The Power of the Actor 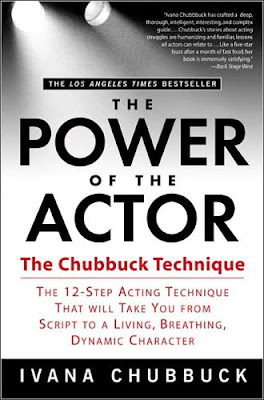 As an acting teacher and an actor that likes to learn, I spend a great deal of my time reading various books on acting techniques, approaches and theories.

Most of them are great and some of them are bollocks, Ivana Chubbuck's book The Power of the Actor falls into the latter category.

Well, not because actors don't have power, they do and lots of it but because her book is a horrible mix of Stanislavsky's System bastardised for imbeciles (which is what much of especially American acting technique is retarded in; Lee Strasberg's Method and it's numerous off-shoots, Chubbucks 12-point plan being the latest malformed offspring) and pseudo self-help psychology that reads like an addict's 12-step program with lots of emotional fascism thrown in for good measure.

Other highlights of the book include handy guides on how to act like you're high on speedballs, realising the mind-set of a serial killer and a formula for organically feeling like a paraplegic/quadriplegic.

The reason I hate it is not just that I'm from the school of thought that would prefer people to just act, rather than fannying about but I also find a great deal of it emotional exploitative and masturbatory.

I'll leave you with a brief true story to illustrate the point.

Occasionally I have to get a cover teacher in when I am away working, I love the cover teacher to bits and we are good friends but she always does very emotional work with my students, where basically the other actors abuse them whilst you think of something terrible that has happened to you. Naturally, this has even the most emotionally stunted of them in tears so that when I come back they gush about how good it all was; a classic error, confusing crying with acting. But when I challenge them to put this emotion into a scene they cannot.

And that's where acting comes in...
Written by Daniel Hoffmann-Gill at 17:01