The Police Are Experimenting on People...

I was heading off to an audition and was waiting at the bus stop at the end of my road for the short ride to Wood Green station, when I spotted this... 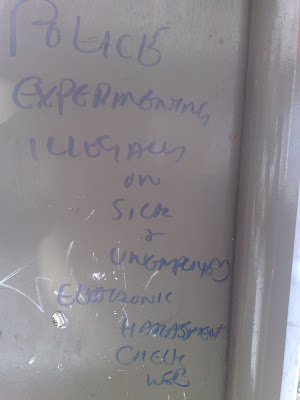 (click on the image to make it bigger if struggling to read the madness on it)
The full text reads as follows:

Which is a pretty odd thing to find written on a bus stop in an urban suburb of London, I mean I expect to see some tedious gang tags or a badly drawn penis, or at the very least someone's name and a reference to how much they love cock...

Instead we get some apocalyptic warning of the British police experimenting (illegally may I add) on the sick and unemployed and also utilising some form of electronic harassment. I decided to follow the bus stop graffiti advice and check the web. This is what I found...

If anyone out there can help clarify the story of police carrying out experiments I would be most grateful as I have a few unemployed and sick people I would like to suggest for the program...
Written by Daniel Hoffmann-Gill at 16:04