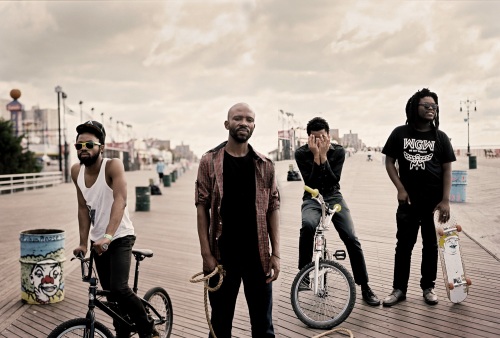 Last night was an amazing night, I have just compiled my top 10 gigs of all time and this might just have to sneak in as a notable mention; it was that bloody good!

This was me and Eva-Jane's third BLK JKS gig after seeing them at Cargo, in Stokey and now at the Hoxton Square Bar & Kitchen but this time we had family with us in the shape of Eva-Jane's sister Gina and her husband Stephen, along with Stephen's good friend Victor.

The pressure was on, I didn't want them to disappoint as Stephen is a fan but never seen them live and the rest are all new to the phenomena that is the BLK JKS. Thanks to Eva-Jane's bravery we pushed our way to the front after the supports acts, the highlight of which was the intriguing, if a little limited, Canadian outfit called Japandroids who were fashionably two-piece, loud and thrashed about to good effect but I just can't help but feel I've been here before.

Anyway, there we were at the front and I noticed the exceptionally gifted drummer and star of the BLK JKS live show with all of his showmanship, beaming smile and charisma that is Tshepang Ramoba and I decided, slightly pissed as I was, to shake his hand and wish him well for the show. He gracefully accepted my out stretched hand and we exchanged thumbs-up before he made his way on stage to set-up his kit.

"OH MY GOD, I JUST TOUCHED A BLACK JACK!" I embarrassingly said to Eva-Jane (when Tshepang was well out of ear shot), whose smiled humoured my fanboy idiocy. Normally I never do this you see, I never try and make contact with the artists I admire but my worry is that these guys will rightly become musical Gods and I will kick myself for never saying to them, face to face, how much their music means to me.

Eva-Jane then spotted that lead singer and guitarist Lindani Buthelazi was waiting to go onstage, playing with his phone and with my courage stoked by one successful BLK JKS interaction and full of unusual courage (otherwise know as four pints of Sleemans) I marched over to greet him.

Some background to this: a while back I got an email off Lindani saying thanks for all the support I'd shown and that he dug a short film I'd made and the next gig in London we should say hi.

I was a bit overwhelmed because he recognised me, knew my name and made a lovely fuss of me as we shook hands, before he excused himself to have a fag outside with the invite to hang-out after the show.

And then, after his quick ciggie, they played and boy did they play...arranged in a wonky line across the stage with drummer Tshepang at one end, stage left with rhythm guitarist and all round lord of the dance that is Mpumi his polar opposite stage right. In between is ominous controlled and connected bassist Molefi next to the drummer, leaving Lindani slightly centre stage.

And then the beautiful noise commenced, as they played only 5 songs in around an hour but instead of merely re-creating them as on the record, the BLK JKS re-imagined them, exploding them and teasing them out into epic, progressive dub rock soundscapes that were a testament to their musicianship, creative chops and intelligence.

It was a wonderful hour of truly amazing music and if you ever get a chance to check them out you must do.

Postscript: After the gig, having been never one to hang around to meet the artist, I was a little unsure as to what to do, so I just kinda stood around near Lindani as he chatted to some eager fans (was I one of them?) and he caught me eye and sidled away from them and shook my hand.

I gave him a quick cuddle, told him how good it was and said farewell. He mentioned that they are back in London, at the Barbican actually but it is on the 28th November, when I'll be performing myself on the other side of London but more on that at a later date.

I'll leave you with some BLK JKS to while away the day with...

Written by Daniel Hoffmann-Gill at 16:37