"If it Wasn't for us You'd all be Speaking German!"

When debating some Americans online, especially those that cling onto the right-wing mindset at all costs, as if battening down the hatches against the perfect storm that is reasoned discussion; the aforementioned debate will, at some time or another, descend to them confusing a dissenting voice with the dreaded bigotry that is being anti-American.

"YOU HATE US FOR OUR FREEDOMS!" they cry, which is usually followed by sharp insinuations that you are some kind of liberal, fag, Jew, Commie American-hater who may or may not support such conservative America bete-noires as Fidel Castro and Hugo Chavez. After this, the more idiotic amongst these twats, the true uber-gits will then bring up World War II and make it very clear that us Brits would all be eating Frankfurters, speaking German and goosestepping about the place if it weren't for the brave intervention of the Yanks.

Septicisle over at the ever-excellent Obsolete turned me on to the following image, taken from the Life magazine archive and shares the data from a poll taken of Americans before their entry into WW2. It makes for interesting viewing... 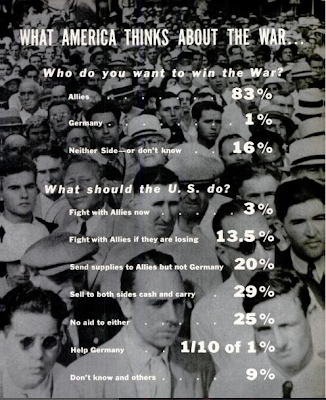 (click on the image to make it bigger)
Thankfully, they backed us regarding who they wanted to win but the other stats make for quite disturbing reading, especially the 29% that were willing to sell goods to both sides.

You see, whenever you encounter a blustering American boosting of their nations involvement in WW2 to justify themselves and their country (after they've successfully constructed the strawman that you hate America and its precious freedoms), you may just have to remind them that Roosevelt dragged the American people kicking and screaming into the war, against popular opinion and after doing a nice piece of hoodwinking at Pearl Harbour.

That and the fact that many had no issue with selling stuff to the Nazis...
Written by Daniel Hoffmann-Gill at 15:27