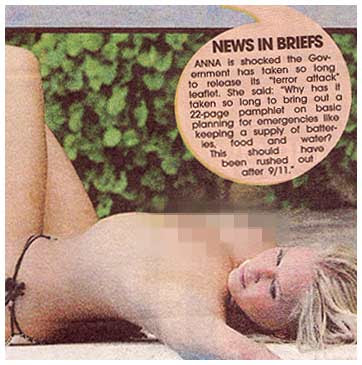 This is a great piece of work by Tim Ireland of Bloggerheads, a short film that exposes the long history of using the Page 3 girls as mouthpieces for political propaganda; brainwashing their readers with boobage, as Tim calls it.

You may laugh but this insidious tactic sums up the back hand way The Scum works to spread myths and whoever's political agenda it is currently backing, as Tim says:


"Since 2003, the Page 3 feature in The Sun has carried an item called 'News in Briefs' instead of the usual pun-filled caption of days of yore. Even the title itself is a lie; this 'news' item rarely carries news, and instead carries an editorial/opinion (an important distinction to make, especially when dealing with media owner Rupert Murdoch, the father of FOX News).


We are not saying that a young woman with her tits out is not allowed to have an opinion; far from it. We are instead asking, if Page 3 is as 'empowering' as some people claim, then why aren't these women allowed to choose which issue(s) they discuss and/or express their own opinion about that when appearing on Page 3?


At present, they are clearly often (if not always) compelled to echo/repeat the opinions of Rupert Murdoch, Rebekah Wade, Dominic Mohan, Graham Dudman, or whoever else is calling the shots that day. This is not empowerment; rather, it is exploitation.


We challenge The Sun to allow Page 3 girls to use their paid appearance(s) in that tabloid as a personal/political platform, just as they do for columnists such as Jeremy Clarkson, Jon Gaunt, Lorraine Kelly and Jane Moore.


If there is to be editorial content on Page 3, then it should be clearly labelled as opinion (not news) and it should always be the heartfelt, unprompted opinion of the woman whose name, face and tits are being used to sell the idea. End of.


Any standard less than this exploits these women and cheats the readers."

Written by Daniel Hoffmann-Gill at 17:07