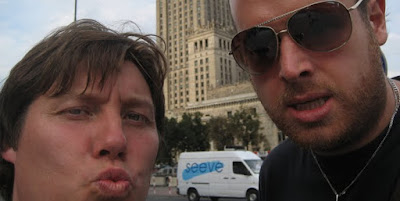 As some of you will already know, because I emailed you and you kindly publicised it on your blogs and websites, Poles Apart is being brought out of retirement after it's sell-out tour of the UK at the beginning of this year.

For an insight into the show from Blurred Clarity itself, check out this raft of posts that cover the last time we toured, the devising/rehearsal process and when the idea first popped up and our time in Poland.

And just in case you don't know, last year, sick and tired of the endless dirge of bigotry, lies and anti-Polish sentiment coming from the right-wing press, me and my mate Mark decided to go to Poland. We wanted to get a job; to put our money where our mouth is and garner a small taste of what it means to be an immigrant. We wanted to single-handedly reverse the Eastern European immigration trend.

So we got our CVs and covering letters translated (badly as it turned out) into Polish, put on our best interview clobber and made our way to Poland in a Vauxhall Astra.

It was an amazing adventure that taught us much on the realities of life as an immigrant.

We eventually returned home and made a comedy show about our experiences that covers not only our time as economic migrants but documents the history of Poland, it’s 300 year relationship with the UK and the highly charged immigration debate in the UK.

The show contains Poland’s brightest new stand-up comedy star: Dariusz Drag, with jokes about Russians and Jews, a beginner’s guide to Polish culture, Political Correctness being wrestled to the floor and made to gag, the 1973 World Cup qualifier between England and Poland brought to life in front of your very eyes and Poland’s leading avant-garde theatre cooperative re-creating the invention of the Keroesne Lamp via interpative dance and extensive harmonica use.

Plus, Nick Griffin, avec eye patch, will be appearing to stroke his mandolin and sing his favourite ballad: “I’m Not Racist But…”

It’s on at The Lowry in Manchester on the 26th November at 7:45pm and the RichMix theatre in London on the 27th and 28th November at 7:30pm and if you've not had a chance to see me and Mark in action why not pop along and support us? It would be much appreciated and you do come, make sure you stick around after to make yourself known...if I don't know you already that is...

To wet your whistle, how about a few videos of our adventure and the show itself?

And if you're on that new fangled facebook thingy, get yourself in on the event group why don't ya?
Written by Daniel Hoffmann-Gill at 12:36