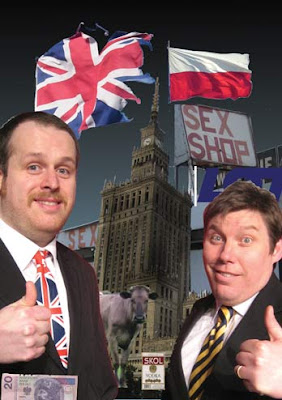 Well, here we are again, one more weekend at home before popping off to Manchester to rehearse Poles Apart.

I've spent most of this week either re-learning my lines (which has come surprisingly easily I am grateful to say), checking over the statistical details of the show (there is always a know-it-all in the audience), or writing new material.

Mark and I decided that it would be remiss of us to let the election of two British Nazi Party MEPs pass unmentioned in a show that is about immigration, especially as the BNP are so obsessed with immigration and race and fundamentally, upon close inspection, their policies and ideas are actually really quite amusing in a backward, oh my God did they really just say that, kind of way.

Although the downside of this was pouring over BNP policy and press releases to get a decent handle on their bizarre dogma (anyone for chain gangs to restore our coastal defences?) whilst trying to make jokes out of it, when it is already pretty ridiculous and poorly thought out in the first place.

Once written we then had to find a home for them in what is a pretty tight show but I think we've found good homes for the three BNP scenes, which are (not wanting to spoil anything for those coming to watch): a Nick Griffin musical medley, an insight into the night the BNP won two seats in the European Parliamentary Elections and finally, what happens when a Nazi tries to join the BNP.

Blogging will be light obviously over the coming week as I am deep into rehearsals but if you can, please do show your support for Poles Apart and come and see us in Manchester on the 26th November (which is nearly sold out I've been told) and London on the 27th and 28th November (which isn't, not yet anyway).

Do widzenia!
Written by Daniel Hoffmann-Gill at 18:15