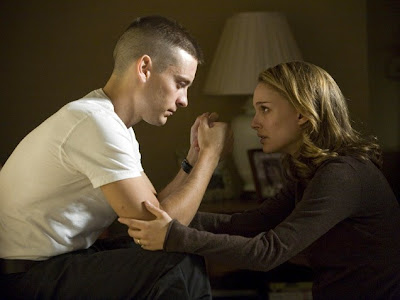 Some time ago I went with Eva-Jane and her family to the pictures, we were intending to see the latest Clooney effort; "Up in the Air" but it was sold out so we opted for "Brothers", a film I had been sub-consciously avoiding because I knew it's content would leave me in pieces.

You see, oddly enough, I am a constant and fervent supporter of our troops, our armed forces; the men and women that fight and die in our name. Ever since the age of 18 I have given money, whenever I can, to military charities and have developed a deep set interest in all things military.

I'm not sure whether my own grandparents travails in the Second World War, or the image of my great-grandfather, who fought in the First World War and lost a limb there, or the military adventures of my German great-grandfather in the same conflict, or even my father's time in the military under National Service, then voluntarily as a member of the King's Troop; left that deep mark.

All I know is that I respect beyond measure the sacrifice of those that lay down their lives for their country.

Now "Brothers" and I urge you to see it, is a film about the effects of war upon the mental health of soldiers and thus their families, set in the United States, it is incredibly distressing and conjures fine performances from all of the its talented cast. It had me in tears or fighting them back for much of the movie because the impact of war is so vast, so all encompassing and my mind was drawn to the 4,378 dead American warriors and their families, who gave their lives in Iraq and the 1,000 US servicemen who have died in Afghanistan. The ripples from those deaths reach far and wide, never mind the long list of wounded and those left mentally disturbed by what they have seen and suffered.

In the UK we too have had our share of loss, 179 in Iraq and 264 in Afghanistan; lives lost and blood spilt on foreign soil, doing your duty but dying far from home. And this does not include those crippled, whether physically or emotionally.

A heavy toll, a mighty price to pay. We owe them much.

And to think that many return home, damaged, in pain, hurting and do not receive adequate care, attention and support! What kind of betrayal is that? What kind of crime is that?

The charities I regularly give to are listed below, all of these are for UK military personnel but I will be more than willing to link to some suitable US equivalents if my American readers know of any. If you can give then I urge you to do so, for our brothers...

Combat Stress: is the leading service provider in the care of Veterans' mental health and able to deliver specialist, trauma-focused treatment and support to Ex-Service men and women whose problems are chronic, complex and long term. They also provide help and advice to their families.

Help For Heroes: was founded by Bryn and Emma Parry in October 2007 out of a desire to help the wounded Servicemen and women returning from Afghanistan and Iraq. The message of the charity is simple: We are strictly non political and non critical; we simply want to help. We believe that anyone who volunteers to serve in time of war, knowing that they may risk all, is a hero. These are ordinary people doing extraordinary things and some of them are living with the consequences of their service for life. We may not be able to prevent our soldiers from being wounded, but together we can help them get better.
Written by Daniel Hoffmann-Gill at 13:41