Garry Cook...You Are a Ballbag Sir! 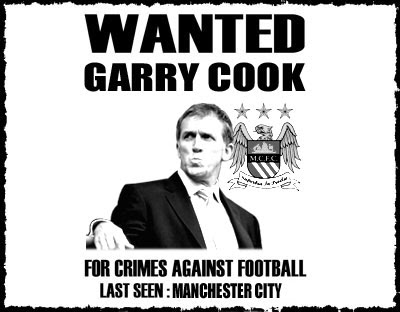 If you don't know, Garry Cook is the CEO of Manchester City, a man who was brought into the club by previous owner and vile criminal/human rights loather/ex-Prime Minister of Thailand: Thaksin Shinawatra. He has stayed on under the current dubious owners (please note the use of United in the companies name, clearly trying to leech some of the power of the one and only Manchester team): The Abu Dhabi United Group for Development and Investment. He was behind the disgraceful sacking of Mark Hughes and the sideways move for his replacement Roberto Mancini.

In summary, the man is a ballbag.

So cast your minds back to the middle of January 2010, the first leg of the semi-final between United and City, thanks to two goals by footballing mercenary Carlos Tevez, the City scum take a slender 2-1 lead into the away leg.

27th January 2010 bought the second leg at Old Trafford, United crushed the collection of cash hungry players known as Manchester City (not a team by a very long shot) 3-1 and deny the scumbags a Wembley appearance...yet again.

I live for such moments.

Blogging is light at the moment due to illness and work, will tell all when safe to do so.


Peace.
Written by Daniel Hoffmann-Gill at 12:18