My Last Five Girlfriends: Some Thoughts 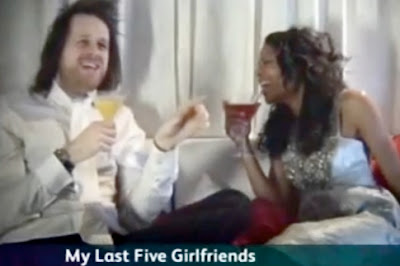 A quick post as just got back from the West Country after yet another final show of Poles Apart (although I really do think that this is it) and got to rush off to a costume fitting in the West End for a new VW advert...

The premiere thing for My Last Five Girlfriends at the ICA was fantastic, I saw the film for the first time and it was awesome, a re-invention of the rom-com format with more ideas per frame than most movies can muster in 90 minutes; the film exists firmly within the real and natural but with amazing elements of kaleidoscopic imagination and with many, many hilarious moments (the talking elephant that levitates is a winner). I am proud to be in it.

I am most definitely in it and I cannot believe that I am in a Paramount Films feature film that is coming out  across a hundred cinemas in the UK, it is a dream come true for me, hopefully a step in the right direction for my career, definitely a step up and as I watched myself on the big screen it had the feeling of the slightly unreal. There I am. In a movie.

It was a weird night, getting a round of applause in the cinema from the audience, leaving the auditorium and having to sign autographs...bizarre indeed, going to the after screening party.

As Eva-Jane and I walked back to get the tube I did wonder if this is the last time as well as the first I'll be in a feature or whether this is the very beginning, I hope it's the latter but even if it is the former; I will hold onto that moment forever.

So, it may be a Paramount Film but it is a low budget affair and needs all the support it can get, especially over the first weekend so get to see it, if you can and show your support for excellent British film making.

UPDATE: you can find where it is playing in a cinema near you, right here, so go check it out!
Written by Daniel Hoffmann-Gill at 10:02