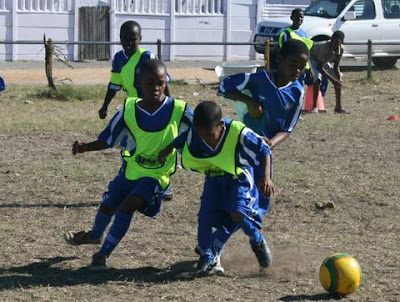 South Africa is of course going to be the home of this year's World Cup, the first time the world's greatest sporting event is to be hosted in Africa and thus, the world's media spotlight has been turned onto, what you could argue is, Africa's leading nation (it certainly is with regards to economic development and GDP).
I have already blogged on the inherent racism that our Western media is blighted with, highlighted, as if some terrible precursor, by the murder of a fat, daft racist. That awful episode does not bode well for the media coverage of the World Cup and I am not looking forward to the 'game-of-two halves' pseudo-coverage: the first half full of colourful African fabrics, singing and pictures of skinny black boys kicking a cheap football around a make-shift sandy-soil pitch; whilst the second half ramps up the notion of South Africa as the home of carjackings, muggings and gang rape...perhaps with even a wink and a nod to the murder rate.
I can feel my heckles rising as the clumsy Western media giant stomps all over the complex nuances of a fine country.
The great pity will be that they will not report on football's true role in South Africa as a crucial device for negotiating masculinity or more accurately, Coloured masculinity.
And here we must take a breather, because in the UK and indeed America, Coloured has a different meaning to that in South Africa as a pejorative, a racist term but in South Africa and its environs it is a valid term (but also, in some contexts pejorative because of the role that the Coloured person plays in South African mythology...but more on that in another post) for a person of mixed heritage, ie: white and African.
Football is very important in South Africa because it is an activity around which Coloured male peer group identities are produced. It has huge uptake in Coloured communities, more so than in African and White communities; it consumes a huge part of life both in the playing, the watching and the discussing. It is both a uniter of Coloured communities stricken with internal conflict and external prejudice and a tool to reinforce and readdress conflicts without resorting to deadly force.
Drawing parallels with basketball in the United States, it is an activity for those men living in those Coloured communities wracked with crime, violence and poverty to escape. Both in the prosaic sense: that through dedication, application and ability one can leave the community behind physically (although, rarely spiritually) and also in the less earthbound sense of sport as the transformative and temporal act of resistance to Coloured identities; of becoming something else, even if only for short time.
It has a similar impact upon the townships themselves, which are unpredictable and violent places but whilst a game is in progress they inherit the heavily regulated and rule-bound elements of the football. Temporarily yes but football plays a crucial part in Coloured life and one that I doubt we will see under the spotlight of our collected news outlets.
Football allows Coloured South Africans, now more marginalised than ever in South African society, to re-imagine themselves as part of the new post-Aparthied South Africa, a much needed sense of self in national identity politics and a way of escaping the racial hierarchy of South Africa that has long placed Coloureds at the very bottom: nether White nor African.
Written by Daniel Hoffmann-Gill at 13:14