Female Circumcision: a Polite Term For Cutting a Girl's Genitals 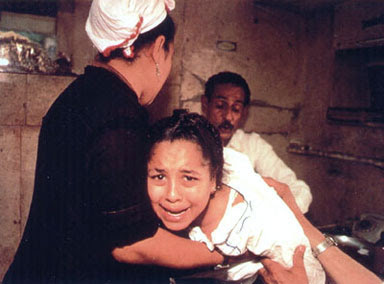 I found it shocking that the mutilation of a girl's genitals occurs in such vast swathes of the world, it is a profoundly disturbing left over of ancient, anti-female violence, carried out by men as a device to repress, control and, to a certain extent, destroy femininity.

I will not go into the depraved details of female genital cutting, plenty of information can be found on the practice, needless to say in most cases it involves the removal of the clitoris, to strip the female of an organ that enables sexual pleasure and of course orgasm.

This is no doubt rooted in perverse, phallocentric thinking; to brutally destroy female pleasure in sexual intercourse, to win back sex from the sullied mewling of the feminine. I do wonder who thought up this act of uber-violence, of inter-gender warfare, what it stemmed from. One can guess, we are all familiar with the clumsy, ill-thought out desires of man and the ease at which he turns to violence in order to force his will.

Ancient man can perhaps be forgiven for this base, backward error but what alarms me more is that it is still practised.

Precise figures are hard to come by, a conservative estimate is that some 130 million women are effected around the world, with 3 million girls vulnerable to genital mutilation each and every year; a raft of fresh victims.

Sadly, Africa is the continent most blighted with the evil practice, in a band that stretches east to west across the continent. Imagine if you will this band peaks at its extremities: on the east that gives us Egypt, Somalia et al and on the west hand side we have Mauritania, Mali and Sierra Leone. The band thins but is still present in Chad, Nigeria, Ghana etc.

Nations at the extremities have a figure of over 80% of the female population having experienced genital mutilation, which is bewildering in its scope. Even those in the slimmer sections of this awful band have rates between 20 and 40%. When one thinks the device used to carry out this practice is usually a razor blade or broken glass, with battery acid used to staunch the heavy bleeding, the speed with which this barbaric act must come to an end becomes even clearer.
Written by Daniel Hoffmann-Gill at 16:56