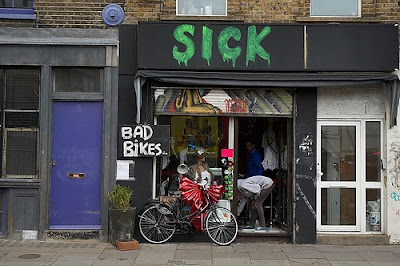 I like to buy interesting clothes, accessories and knick-knacks and occasionally I peruse Time Out for shopping recommendations, to add to my list of places I always go.

They recently had a special feature on Redchurch Street, which is just off Brick Lane and one shop they mentioned, called "Sick", caught my eye.


"A grungy thrift shop, run by the founders of cult 1980s label Boy, which specialises in '90s vintage (if you can call it that). The store also sells a good selection of restored bikes and is shortly to open a fashion 'laboratory' in the basement. Whatever that is."

Well, I was always a big fan of Boy and I'm looking for 90s fashion at the mo, both personally and for my play and I do love a good restored bike, as well as a chance to rustle around in some brick-a-brac.

I stepped into what could only be described as an odd smelling shit-hole which contained hardly any stuff at all, most of it artily hanging off the walls, surrounded by detritus. The two people sat down chatting at the far end of the store, not actually that far away from the door in this mini-retail hell-pit, barely acknowledged my entrance; aside from a vaguely discernible sneer.

Now I don't mind them being vacuous, self-important fashion ponces but at least show you can grasp basic customer service techniques, especially when you're asking ridiculous sums of money for bits of old tat. Anyway, I went in further and looked at the "restored" bikes, which actually hadn't been restored at all and I should know because I've just been restoring two 80s bikes for my play.

I ventured closer towards the two wittering shop workers: one was about 50, leathery and dressed like a Frankie Goes To Hollywood off-cut; the other, a female, had some sheer material draped about her visage. They stared at me in utter silence. I politely enquired:

The leathery old pillock frowned at me like a frazzled Bukowski wannabe and the lady breathily exclaimed an affirmative. As I peered down the stairs, into what looked a tramp's basement, it occurred to me that maybe the bit of material hanging off her head was a symbol of her empathy with French Muslim women, who are banned from wearing certain types of religious headdress. I digress...

Downstairs was worse, basically an explosion of stinky old clothes, dis-figured mannequins, bits of sheeting used as dividers and an all pervading stench of damp, sick and piss. Two other customers were poking about in the melange of crap, trying to be cool no doubt and they briefly confused me for a member of staff, until I smiled at them, therefore belying my lack of pompous coolness and giving away the fact I was a decent human.

I made my way back upstairs to escape from this God awful "shop" (I use that word in its loosest possible sense) to find the polyester enveloped crone blocking my exit and seemingly impervious to my massive physical presence. My patience by this time was wearing very thin indeed, so I manhandled the dozy bint out of the way, bolstered with a booming:

She made some kind of noise as I stomped out of their pretentious car-boot sale emporium, to which I shouted:

"THIS IS FUCKING RIDICULOUS! THIS IS NOT EVEN A FUCKING SHOP!"

And with that I was gone, chuntering under my breath about how some parts of London seem to be in love with pretending to be poor and forgetting that basic customer service is not some old-fashioned concept but an important part of being a decent human being.

So in summary then, Sick of 105 Redchurch Street, London, E2 7DL is the worst fucking shop I've ever had the mis-fortune to step into, in my entire life.
Written by Daniel Hoffmann-Gill at 17:10